Sisters Rodeo “The Biggest Little Show in the World” 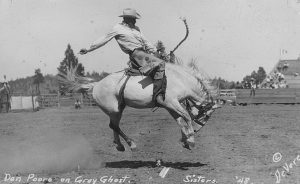 Its finally here, the 2019 Sisters Rodeo!  Make sure you get your tickets and enjoy the Biggest Little Show in the World in beautiful Sisters, Oregon!

Don’t go to the rodeo without getting to know the events that you will see.  Impress relatives and friends with your expertise!

Rodeo’s classic event has roots in the Old West, when cowboys showed off their style riding untrained horses.  Each rider must begin with his feet over the bronc’s shoulders to give the horse the advantage.  A riding who synchronizes his spurring action with the horse’s bucking will get a high score.  Other facts affecting the score include the length of the cowboy’s spurring stroke, how hard the horse bucks and the rider’s control.  If the rider touches the horse, himself or his equipment with his free hand before the eight second buzzer, the rider is disqualified.  The rider is also disqualified if either foot comes out of a stirrup, the bronc rein gets dropped or the rider gets bucked off before the buzzer.  At the Sisters Rodeo, we also have Team Bronc Riding, where a three man team must catch a wild horse, halter and saddle it, then a team member mounts to ride the horse past a barrel at the far end of the arena.  The three team members are a “mugger”, an “anchor” and a rider.  This was one of the first events in Sisters Rodeo history and a favorite of the fans.

Just like bareback riding and saddle bronc riding, bull riding is an eight second event and the score is based half on the rider’s performance and half on the bull’s efforts.  Upper body control and strong legs are the secret to staying on the quick moving one ton bulls.  Judges look for the rider’s body position, use of the free arm and spurring action.  Spurring is not required but will add to the rider’s score.  At the Sisters Rodeo, we call this event Xtreme Bulls, the only official sanctioned bull riding tour of the Professional Rodeo Cowboys Association.  Xtreme Bulls is held on Wednesday.

The tie down roping event requires teamwork between a rider and horse.  The calf is given a head start, chased by horse and rider.  The cowboy ropes the calf, then dismounts and runs to the calf to tie its legs together.  The rider remounts and the calf must remain tied for six seconds.  When the rider fails to give the calf the required head start, there is a penalty for “breaking the barrier”.

The fastest timed event in rodeo, steer wrestling pits the cowboy against a big, strong steer with the goal of “bulldogging” the steer to the ground. The steer is released before the “hazer,” a second rider who herds the steer straight, and the bulldogger, who is charged with diving from his horse onto the steer. He needs to bring the animal fully to the ground by rolling its head and stopping forward motion with his heels into the ground, causing the steer to fall. Riders must not “break the barrier” before the steer or are disqualified.

Barrel racing is a favorite sport of cowgirls and fans alike.  In barrel racing, the contestant and her horse enter the arena at full speed, starting the clock. Then the racer rides a cloverleaf pattern around three barrels positioned in the arena, and sprints back out of the arena.  The contestant can touch or even move the barrels, but receives a five-second penalty for each barrel that is overturned. With the margin of victory measured in hundredths of a second, knocking over one barrel spells disaster.