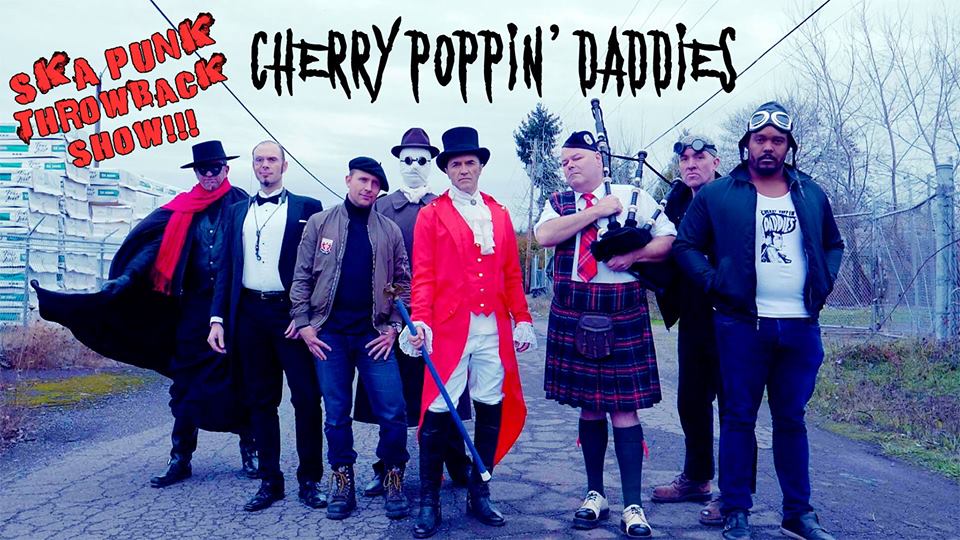 Join us on our outdoor patio Saturday, June 22 for Oregon legends Cherry Poppin’ Daddies! Doors open at 6pm, show starts at 7pm. Our shows are

Join us on our outdoor patio Saturday, June 22 for Oregon legends Cherry Poppin’ Daddies! Doors open at 6pm, show starts at 7pm. Our shows are all ages.

Tickets are $20 in advance at www.bendticket.com and will be $25 at the door if they are still available.

In the past few years Cherry Poppin’ Daddies have become the kind of band that you would want to book if you were throwing a soiree at the Gatsby mansion. Penning elegant, lush, pitch perfect arrangements of much of the great American songbook, from Cole Porter to Frank Sinatra, the Daddies have surprised many- likely familiar with them from the early 90’s- whose limited exposure to the band undoubtedly consists of an image of spray painted vans careening across the US as an iconoclastic, misfit part of an already marginalized punk/ska scene.

In fact the Daddies have of late put together a number of excellent swing/ jazz sit down theatre type shows, each tailored to a different era of swing music: a “Jazz Age Lawn Party” consisting of roaring 20’s and Cotton Club Era material, a swanky “Live at the Sands” type tribute to the Rat Pack, and a World War 2 “Christmas Canteen” show that is part Tiki, part Benny Goodman and comes across like a radio broadcast from Guadalcanal circa 1942. The sheer craftsmanship and professional attention to detail of these performances have shed new light on this criminally underestimated band.

On top of being a show band nonpareil, the Daddies have an “oh by the way” double platinum ability to pen original material that, while influenced by a history of American popular music, is wholly modern lyrically, and itself stands up as classic. The 1997 release of Zoot Suit Riot set the bar for the neo-swing movement of the era in terms of originality, lyrical depth, and flat out musical sales.

When you see the Daddies perform their original material you are struck by the poetry and audacity of artistic vision. Whole stirring narratives are laid down in swinging couplets that evince dual meaning and social critique. Consider Master and Slave from 1990…

“Friends and Romans I’m your brother
I’m scratchin’ to hang on
The pursuit of happiness is just a carpetbaggers con
When a can of pork and beans could change my attitude
You wont give it up, but I could’ve been you
While the masters and the slaves scratch for pieces of the dream
For purple mountains majesty whatever the hell that means
They give up on each other and that’s the way they get ahead
But I can still see the stars
Through these red, white and blue prison bars”

…ok, this is not Cole Porter clever, but it’s not trying to be, it’s something striving to be new, to be challenging, courageous, and truthful. It’s not art simply designed to match the couch. What kind of band takes these kind of chances, both musically and thematically? The Daddies, that’s who.

Singer songwriter/ bandleader Steve Perry puts it this way, “Lately, by laying our hands on the great American songbook, we have been trying to fill in for audiences the historical back story of what inspires our original brand of Americana, because in essence that is what I consider us to be, an Americana band. But instead of taking mostly from a delta blues tradition- like many of the bands labeled “Americana”- we adhere mostly to a pre rock, pre mid 50’s, hot jazz and essentially Tin Pan Alley tradition. Then we attempt to deconstruct and détourne those set of tropes to fit modern themes, be that something like child abuse or say the opioid crisis. It’s unfortunate, but I believe it comforts modern audiences to see that we are able to play, in an orthodox fashion, material that is in the tradition, before they allow us to reach out for something unfamiliar, multifaceted, or god forbid anti-bourgeois in point of view like many of our originals are”

Sadly, over the past year the band has been laying low and playing a bit closer to home in order that Perry can be a caregiver to his wife, business partner, and video muse, Yvette “Cherry” Perry who was recently diagnosed with stage IV colorectal cancer. “This setback for our family has brought us closer to our fans, who have been so giving of their best wishes and helping with small donations to Yvette’s cancer care. We pledge to continue our advocacy work nationally toward earlier colorectal screening protocols and baseline cancer research so that this scourge that has been loosed on so many families like ours can be wiped out sooner rather than later.”

Proximity to home has allowed the Eugene, Oregon band to recently finish a new recording slated for release in late 2018 called Bigger Life. Perry says, “Bigger Life is 14 songs that will allow us to touch base with our punk/ ska audience. We will continue to play the all swing, classy theater type shows that are our bread and butter, but in addition, at some point in 2019 and 2020, we would like to book a few special tours and play occasional festivals where we crank it up and play only ska punk, hopefully joining forces with some of the bands that befriended us as we were all coming up in this business. This new record turned out really special and we are excited for people to get their ears on it.”